Thank you for your patience while we retrieve your images.

Created 27-Apr-11
Visitors 21
26 photos
This gallery contains photos of various pieces of equipment and configurations that I've put together for taking my high speed photos. Here are some answers to questions people have asked me:


So...um...but...uhh...how does all this work?
Here's the basic process: I set up the target, load the projectile into the gun, pressurize the gun, and then turn off all the lights. Then, within one second, I release my camera's shutter with a remote, open the valve (trigger) on the gun to release the projectile, the projectile leaves the barrel of the gun and very shortly thereafter breaks an infrared beam of light ( http://www.bernardsphotos.com/highspeed/setup/h174a7a64#h174a7a64 ), that sends a signal to a delay timer which proceeds to wait, once the timer expires it fires off the flash which (if everything is tweaked correctly) coincides with the projectile hitting the target. After that, the studio (i.e. my garage) goes dark again and I wait (yawn) for the second to expire.


What's with that black box and all those wires?
The key piece of all of this is the high speed timer and trigger that I built from some kits I bought from HiViz ( http://www.hiviz.com/ ). Specifically, I use the TPG-DU-BB Transistor Photogate-Delay Unit Package with Breadboard. I also have the SK2 Sound Trigger, but have yet to use it. The parts as-shipped and configured from HiViz work fine for one-off applications, tech demos, and science fair types of projects but they don't come packaged in any sort of a protective enclosure and the potentiometers are kinda small and fiddly. To make my trigger a more rugged device that I can quickly set up, take down, and use over and over again I bought an enclosure and some upgraded potentiometers and switches (from Vetco http://shop.vetcosurplus.com ), reconfigured HiViz's circuits to fit on one breadboard, and then built the little black box timing and trigger unit shown in the photos below.


What kind of gun is that?
It's an air gun of my own design built from schedule 80 PVC pipe and brass fittings bought from McLendon's ( http://www.mclendons.com/ ) and pressurized with a bicycle pump. The projectile is "a nickel plated steel sphere (12.7mm dia)" from a Geomag kit ( http://www.geomagsa.com/cp_gioco.php ). I hesitate to go into more detail than that because, frankly, if its design and operation isn't apparent from the photos then you should probably reconsider whether building and operating something like this is something you ought to be doing in the first place.


How fast is the projectile going?
The projectile is fired with between 20 - 60 psi in the gun. I've learned over time that 35 -40 psi seems to be somewhat of a sweet spot for repeatability...which is what taking photos like this is really all about...so most of these photos were probably taken in that range. That said, don't know what the exact speed is because I've never bothered to measure or calculate it.


The EXIF data says the shutter speed is 1 second, why aren't things blurred?
High speed images are all taken in complete darkness with the only light coming from the flash. When the flash is the only light source available then it doesn't matter how long the shutter is open because the camera isn't going to gather any more light when the flash is off. So the actual exposure it only for the ridiculously short amount of time that the flash is actually discharging. Note the streaking in this shot: http://www.bernardsphotos.com/highspeed/setup/h174a7a64#h55be3c1 , that's what happens when there's a bit of ambient light duing the exposure. The dominaitng power of the flash illuminates the scene to freeze the projectile for an instant, but the ambient light is still enough to burn in a faint path. There's nothing magic about 1 second. That just happens to be a convenient amount of time for me to set off the shot.


What's your lighting set up?
All of the images in my high speed galleries are lit by a single Nikon SB-800 flash triggered through a flash cord connected to the triggering and delay unit. Sometimes the flash is aimed directly at the subject and sometimes I shoot off or through a 24 or 36 inch umbrella.


Are those shots in sequence?
Even though some of my images may appears as though they are photos in a sequence, that's just a coincidence. They are all just the single photo from one high speed event.
© Bernard's Photos 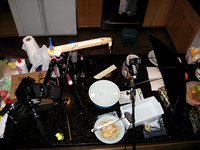