Thank you for your patience while we retrieve your images.

Created 20-Aug-13
Visitors 41
25 photos
On August 19, 2013 we got the call from Matt, our friend and neighbor, letting us know that our beloved Killy passed away in his sleep sometime in the wee hours that morning. It’s the call you never want to get, period, but to get it while on vacation is particularly hard. René and I can’t thank Matt enough for taking care of Killy while we were away and being there for him Killy when we couldn’t. It was burden we never imagined he’d have to bear and a true kindness we’ll never forget.

I would like to think that Killy is now in a better place, but he was such a “relentlessly cheerful” dog, as we used to say, who loved everyone and everything so much that it’s hard for me to see how he could find his new world much happier than the one he left. But I’m sure he will. After all, his passion for exploration (though some would less charitably call it slinking out of sight to run around the neighborhood) was legendary. Hopefully he’ll be able to find places where there are always new and interesting smells to sniff; where the lakes are warm and the shade is cool; where the snow it always perfect for making snow angels; and most importantly, where he can finally corner that spot of light that used to flit around our kitchen and then tear it apart photon from photon.

This gallery contains some of my favorite photos of Killy throughout his fourteen and a half years. I’m not sure which one is my ultimate favorite, but the one of him under the Rosemary bush has to be right up there. Back when his legs could still manage it, he’d go there on brew days and watch the world go by in the cool, sleepy comfort of the shady little den he made for himself. He seemed truly peaceful, happy, and content in that spot, which is why I’ve always liked that photo…and even more so now.

If you’d like to leave a comment in the guestbook for this gallery, please have it start with “I remember the time when Killy…”
© Bernard's Photos 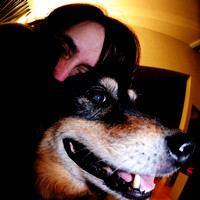 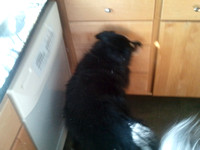 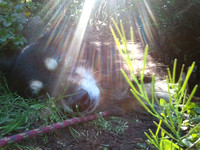 Guestbook for He Was a Good and Faithful Dog
Sarah Konings(non-registered)
There are so many wonderful memories of Killy, it is hard to pick just one... I remember when Mackenzie taught Killy how to sneak tomatoes off the plants in our garden. Apparently the lesson did not include how to tell which ones were ripe because our yard was filled with half eaten green tomatoes.

At the risk of ascribing too many human emotions to our furry friends, Killy was Mackenzie's best buddy and we are grateful for all the wonderful times that they spent together at both our house and yours.
Matt Stapleton(non-registered)
It is hard to write this without tears flowing down my face. I remember Killy in the Lavender bush on brew days as well, it cracked me up as he would dig into his perch and just take it all in. I remember his love for the hose, chasing the stream of water relentlessly, if you did not turn off the water he would go forever. I am so sorry Bernard and Rene.

Matt
Dipankar Ray(non-registered)
I remember the time when Killy eagerly approached our cat Lurleen, hoping for some good clean play. Instead he got a swipe from Lurleen that left one of her claws embedded in his nose. Darn dog was so cheerful that it didn't faze him for one second; tongue was still lolling out the side of his mouth, and he was still trying to figure out how to engage Lurleen in some play. "relentlessly cheerful" is Killy in a nutshell. I also remember having great fun playing tug-o-war with him and a short piece of thick knotted rope. After 10 min of that game w/him, I understood very clearly why it was that Bernard was so fiendishly (if stealthily) strong.

You have raised wonderful dogs that have given us all great pleasure and joy. Cyrano was an incredible dog, and Killy was too (both had completely different natures, yet both were marked by strong personalities and dispositions as sunny as they were disparate). Brulee too is an awesome dog, too - so clearly you folks know what you're doing. Thanks for sharing your beautiful dogs with all of us.
The guestbook is empty.
Loading...
Powered by ZENFOLIO User Agreement
Cancel
Continue